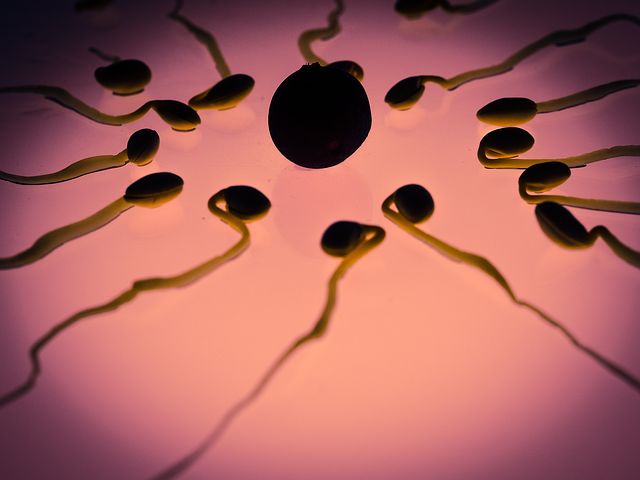 Over 90% of healthy individuals’ body can fight HPV naturally and get rid of the HPV infection completely within 2 years, according to US CDC.

However, there are several questions that arise regarding the ability of HPV to cause infertility:

Can HPV cause infertility in male by affecting the sperm?

Can HPV and genital warts or HPV vaccine cause infertility in females, and impact the pregnancy?

Here are the findings of medical research.

Can HPV Cause Infertility In Male?

Male sterility is the inability of a man to cause pregnancy in a fertile woman. It can be caused by several factors in the body and in the environment. Some of those that can affect male fertility include pre-testicular, testicular, post-testicular problems and sperm abnormalities.

So can a man with HPV get a woman pregnant?

Scientists argue that the infection of the sperms by HPV can be the leading cause of male infertility because it affects the sperm motility. According to Journal of Pathogens, studies have well established that HPV infections in men can result in semen contamination, whilst HPV sperm infection is also a challenging problem for sperm donor banks.

For instance, one research investigated 111 men whose intimate female partners were infected with Human Papillomavirus. Results show HPV DNA was detected in the semen of 23.4% of men.

HPV acts through different mechanisms and at various steps of human conception to cause infertility, with sperm parameters impairment is the most widely recognized effect of the infection.


In another study published in the Asian Journal of Andrology regarding the correlation between HPV sperm infection and male infertility, Liquid Bead Microarray technology (LBMA) were used and an evaluation of 24 HPV genotypes in infertile and fertile males were confirmed.

The study found significant decrease in the Sperm Progressive Motility (PR) and the normal morphology rate among the HPV positive males. 5 different strains of high risk HPV were found to be major risk factors of male infertility: HPV-59, HPV-45, HPV-52, HPV-16 and HPV-18.

This research concluded that HPV infection may decrease male fertility, since HPV decreases the sperm morphology rate and the sperm PR.


How Does HPV Cause Male Infertility?

The HPV DNA doesn’t only lie in the perianal region and the external genitalia i.e. in the foreskin, glans penis and scrotum but they extend to the testicles, epididymis, dictums deferens and the urethra. Therefore HPV infection may affect the semen and eventually cause male infertility.

There are several studies that have been carried out to review the role of HPV on sperm parameters, fertility and the implication of using HPV infected sperm cells in assisted reproduction”.


One research published in the Fertility and Sterility Journal was carried out by Foresta et al, found the sperm motility was significantly reduced in HPV-DNA infected young male adults. The study shows that sperm infection with HPV viruses can affect sperm parameters, fertilization and miscarriage rate in case the pregnancy happened.

Another study shows that HPV infection has significant impact on estimating the male fertility or utilizing assisted reproductive technologies among the infected couple. Infected couple have a greater chance of losing a pregnancy as compared to a healthy couple. The research also established that the main cause of infertility among mature males was the fact that HPV infection lowers the sperm vitality, sperm PR and sperm morphology.

The evidence from prior studies shows that if an embryo is infected through a virus infected sperm, then the likelihood of a miscarriage increases. Although some other evidence shows that when HPV is present in sperms, only a percentage of the total sperm cells is infected and therefore it can be localized in sperm or in the exfoliated cells, say the researchers in University of Padova.

This then means it can have a different impact on the motility, infected sperms are able to penetrate the oocyte. The HPV virus affects the sophisticated immunotolerance between the embryo and the mother and therefore it may trigger a miscarriage. However, according to Schehofer of the German Cancer Research Centre in Heidelberg, this is a speculation and hence more studies need to be done to support the claims.


While there are small sample studies that show HPV is a risk factor on male fertility, it is still not entirely clear how HPV gets in the testicles and how it gets to the sperms, how does HPV affect sperm, and whether the virus has significant effects on the embryo. More sophisticated studies are required to define the role of HPV sperm infection in clinical practice.


Can HPV Cause Infertility in Females? Impact During Pregnancy?

The presence of HPV alone cannot affect a woman’s chances of getting pregnant.

According to World Health Organization, high risk HPV types 16 and 18 cause about 70% of cervical cancers and precancerous cervical lesions.

Among the HPV CIN 1 / 2 / 3 and LSIL / HSIL treatment options, abnormal cervical cells may be removed with Ablative treatment like Cryotherapy, or Excision treatment such as cone biopsy and LEEP/LLETZ procedure that may bring potential pregnancy complications and conception risks.


In a research titled “Human Papillomavirus Infection and Fertility Alteration”, studies related to HPV in female infertility and miscarriages show HPV may cause adverse effects like premature rupture of membrane or miscarriages, whilst HPV trophoblasts infection may corrupts the embryo’s health and its ability to invade the uterine wall.

Key reasons behind are, the treatment procedure adopted can as well cause stenosis or narrowing of the cervix opening, and therefore cause sperms slow and make it difficult for an egg to get fertilized.

Depending on how much tissue is removed, the treatment a woman undergoes to remove cancerous cells can weaken the cervix, with the resulting condition is known as cervical insufficiency. This condition may impact a woman’s ability to reach full pregnancy term.


Dr. Anil Kamath further addressed the question “will cervical cancer affect the ability to have children?” in video below:

“Yes, cervical cancer will affect the ability to have children. This is because since the uterus is affected and surgery involves the removal of uterus — the chances of the lady conceiving after treatment for cervical cancer is virtually non existent.

Apart from this, treatments like radiation and chemotherapy also have an effect on childbearing. The chances of the lady conceiving after either of the treatments is extremely small.

For young ladies who are affected with cervical cancer and if they are in early stage, there are certain types of surgeries especially called radical Trachelectomy in which only the cervix is removed and upper portion of uterus can be preserved. These ladies can have children.”

Can HPV Pass From Mother to Child During Pregnancy?

Medical studies show HPV can be passed from mother to child during childbirth.

In a research on 167 pregnant women, cervicovaginal / placental samples and various samples in children of HPV-positive mothers were collected for HPV DNA testing. The findings indicate high prevalence of HPV in pregnant women (45%) and in placentas (14%), whilst 11% of the newborn infants were tested HPV-positive.

Other studies that demonstrated evidences on vertical transmission through infected mothers to their infant’s infection include:

Dr Irina Korneeva further talks about HPV and pregnancy in video below.

Can Genital Warts Cause Infertility in Men and Women?

Genital warts are soft growths that are caused by HPV in men and women. They usually occur on the genitals, normally as flesh-colored bumps or have a cauliflower-like appearance.

The types of Human Papillomavirus (HPV) that cause warts are different than the HPV strains that cause cancers. There are over 100 types of HPV, generally categorized into 2 key categories:

Similarly, a woman’s fertility may be affected by treatment of precancerous or cancerous cervical cells – that are also caused by high risk HPV types.

These are different than the low risk HPV that cause warts, such as low risk HPV type 6 and 11 cause about 90% of genital warts (that are normally benign).

As of now there is lack of studies that show the presence of genital warts caused by low risk HPV can cause infertility in men and women, with further studies are warranted.


The Relationship of HPV Vaccine and Infertility

Can HPV vaccine cause infertility, just like the following claims?

Several scientists have largely debunked this idea and blew a clear air concerning the issue.

For instance, according to journal Paediatric and Perinatal Epidemiology, one study show little correlation between the HPV vaccine and the chances of conceiving for both female and male.

This research shows the controversial HPV vaccine does not cause fertility problems, and in contrast it is found to increase fertility because it has the ability to cub the cancerous and post cancerous cell development in the cervix.


However, in another research conducted by Baruch College The City University of New York as shown below, some correlation is found between HPV vaccine and infertility when a lowered probability of pregnancy is observed among American females aged 25-29 who received HPV vaccination. 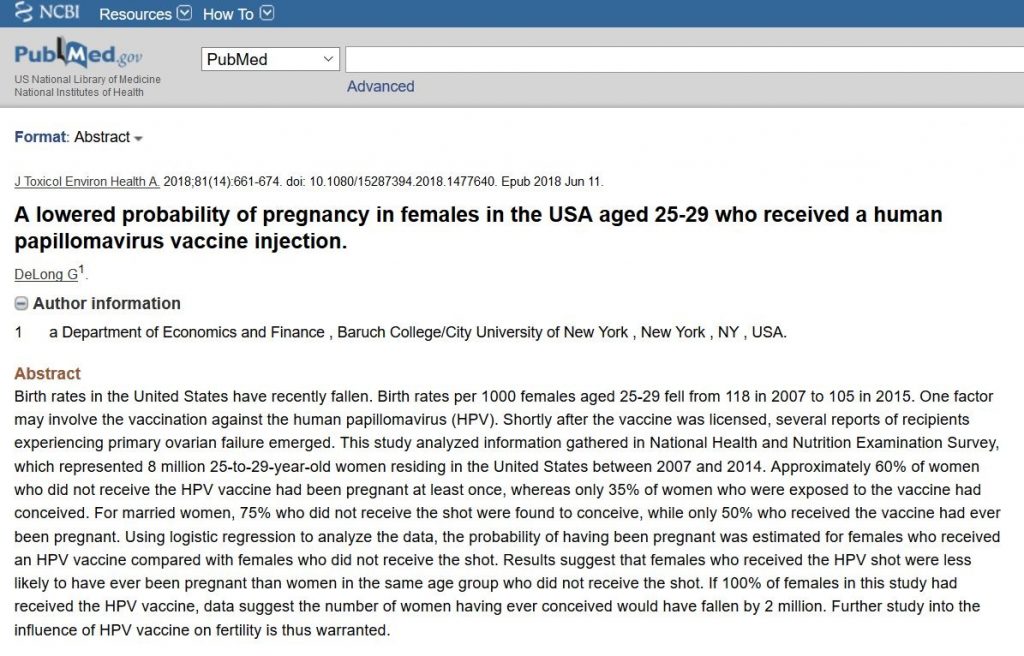 As such, further research are warranted to study the influence of HPV vaccine on fertility of females and males.

Be the first to comment on "Can HPV Cause Infertility in Males and Females? Medical Studies Revealed…"