But are such HPV medication like Podofilox / Condylox topical gel available to buy over the counter at places like Walgreens and CVS – without doctor prescription?

What is the alternative to get rid of genital warts naturally?


What are Condylox / Podofilox Gel and Solution: How Do They Work?

Podofilox, also called Condylox, are prepared and available in various forms – such as cream, gel, and solution. They contain active ingredient Podophyllotoxin as extract from the mayapple plant roots with antiviral properties, that also acts as inhibitor of cell division metaphase.

When applied on the warts, these topical ointments work by infiltrating wart tissues with toxic effect on its nucleus, causing HPV virus can’t spread to new cells, and thus allows healthy skin to grow in its place after killing the genital warts.

The U.S. National Library of Medicine revealed a medical study on 60 women with genital warts, with results showed Condyline successfully achieved 82% primary clearance after termination of treatment, while the total frequency of warts eradicated was 94% with podophyllotoxin.

Podofilox gel and Condylox solution are widely used in Europe, under brand names like Condyline, Wartec, and Warticon. They can be purchased online at UK-based clinics and pharmacies with free online consultation, such as: EuroClinix, OnlineClinic, and Health Express.

Unfortunately, podofilox cream and condylox solution are not available for sale over the counter in the United States, as you will only see non-genital wart removal products – such as Compound W and Dr Scholl’s wart removers – in popular stores and pharmacies like Walgreens and CVS.

It is important to note that these products are only formulated for treatment of non-genital warts (eg. plantar warts and common warts), but they are not designed to be used for genital warts removal — as clearly stated on their respective manufacturer’ instructions and warnings. 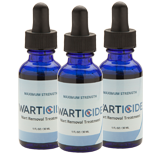 A topical HPV genital wart treatment option is Warticide, which is available over the counter without doctor prescription required. This topical solution is formulated with natural cedar leaf Thuja oil and tea tree oil to help get rid of genital warts at home with convenient dropper. >> Learn More

As recap, among over 100 types of HPV strains, WebMD revealed that HPV-6 and HPV-11 cause about 90% of genital warts on men and women, while other types of wart are due to low-risk HPV strains like HPV-1 and HPV-4 as shown below.

However, as highlighted by the U.S. National Library of Medicine, low-risk HPV can develop into various skin warts (such as genital / plantar warts) after the incubation period of 2 weeks to 8 months.

Based on reports from MedScape and FoxNews –

When Dr. Smith has had inquiries from people asking on AHCC genital wart treatment, she suggested they could go ahead and try it since the AHCC extract has no side effects.

According to the aforementioned reports, several people have feedback to Dr. Smith that their lesions were cleared up after using AHCC and did not come back, with below are some additional reviews and forum feedback:

Sam from Thornlie of Australia feedback via Topix Forum: “I got GW 9 months ago and i was not happy… I came across a study with AHCC Gold which was getting good feedback. And i could tell within a week of taking 2 tablets 3 times a day that it was working and i was over the moon…”

jimjam2400 feedback via MedHelp Forum: “I’ve been taking AHCC 3000mg every morning for about a month and a half now. On an empty stomach and waiting at least an hour to eat anything. Over this time my little patches of warts are definitely starting to fade. It’s safe to say its working for me and i’m going to continue the dose for an entire 6 months.“