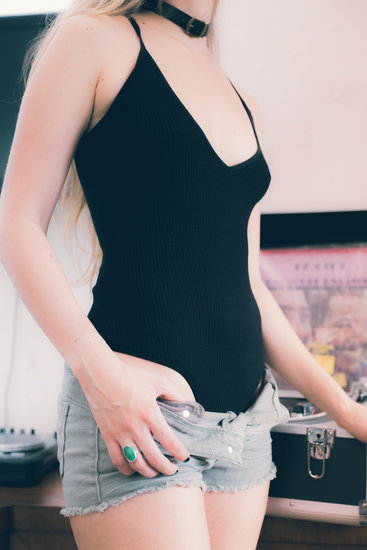 Cervical cancer is on the rise.

Among the medical research, rates of cervical cancer in women aged 20-24 in England is seen to double, and the latest 2019 report published by Medscape revealed increase in cervical cancer among young women in Japan.

Virtually all cases of cervical cancer are caused by Human Papillomavirus (HPV), with high risk HPV types 16 and 18 cause about 70% of the cervical cancers and precancerous cervical lesions.

Stage 0 cervical cancer means the cancer is confined to the surface of cervix without growing into deeper tissues. If left untreated, these abnormal pre-cancerous cells may become cancer and spread to nearby normal tissue.

The following table shows some pro and con comparison of these treatment options – according to American Journal of Obstetrics and Gynecology, eMedicineHealth, and WebMD:

In video below, M.D. Alessandro Feo shows an outpatient LEEP surgery which was done under local anesthesia (WARNING: Video contains graphic content that may not be suitable for all viewers)

Based on International Federation of Gynecology and Obstetrics (FIGO) staging system, Stage 1 means the cancer is confined within the neck of womb/cervix, and it has not spread to nearby tissues or other organs.

According to Stage 1 cervical cancer treatment guideline, the treatment depends on the patient’s desire to have children, type of cancer (type of cells the cancer started in), exact location of the cancer, and other health conditions: 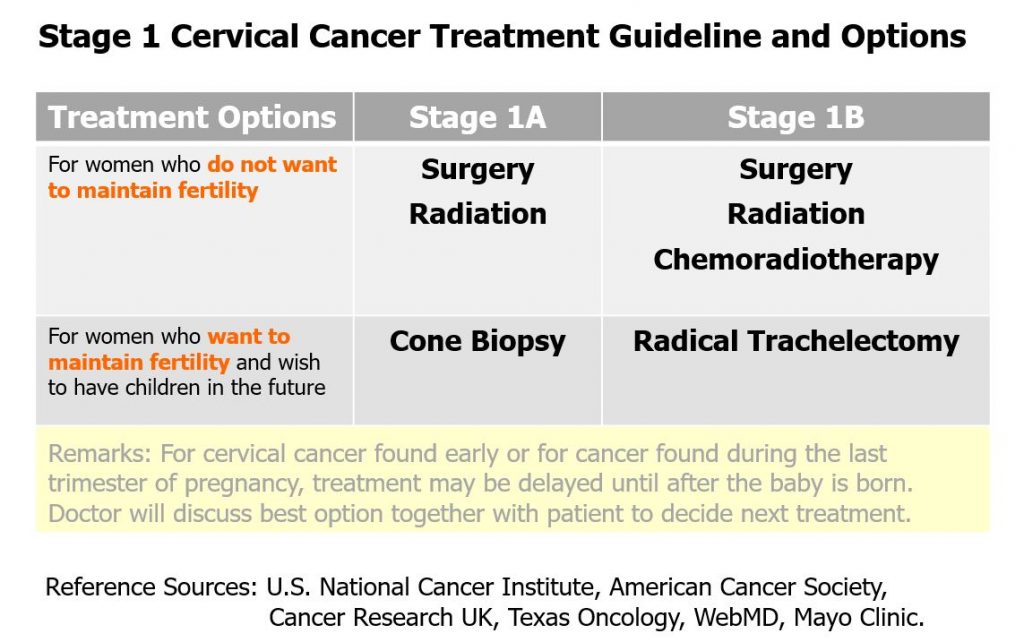 Below is a cervical cone biopsy video by M.D. Ajit Virkud, with the treatment was done using a cold knife. (WARNING: The video contain graphic content not suitable for all viewers)

Recommended Read: 50+ Practical Items That Can Help To Improve the Quality of Life of Cervical Cancer Patient During Treatment / Chemotherapy / Radiation

Stage 2 means the cancer has grown beyond the cervix and uterus, and begun to spread outside the neck of cervix:

Stage 3 means the cancer has spread to the lower part of the vagina or the walls of pelvis:

Stage 4 means the cancer has spread to organs or other parts of the body outside the cervix and womb:

The 3D medical animation video below shows a detailed explanation of the criteria doctors use to stage cervical cancer, with staging refers to the extent of the spread of the disease.

According to medical professionals, Stage 2 and stage 3 cervical cancers are currently best managed by Chemoradiotherapy, which is a combination of radiation therapy and chemotherapy.

Stage 4B patient might receive a combination of treatment that includes radiation chemotherapy and surgery, while the patient may also be asked if she wants to join clinical trial for experimental cervical cancer treatment. 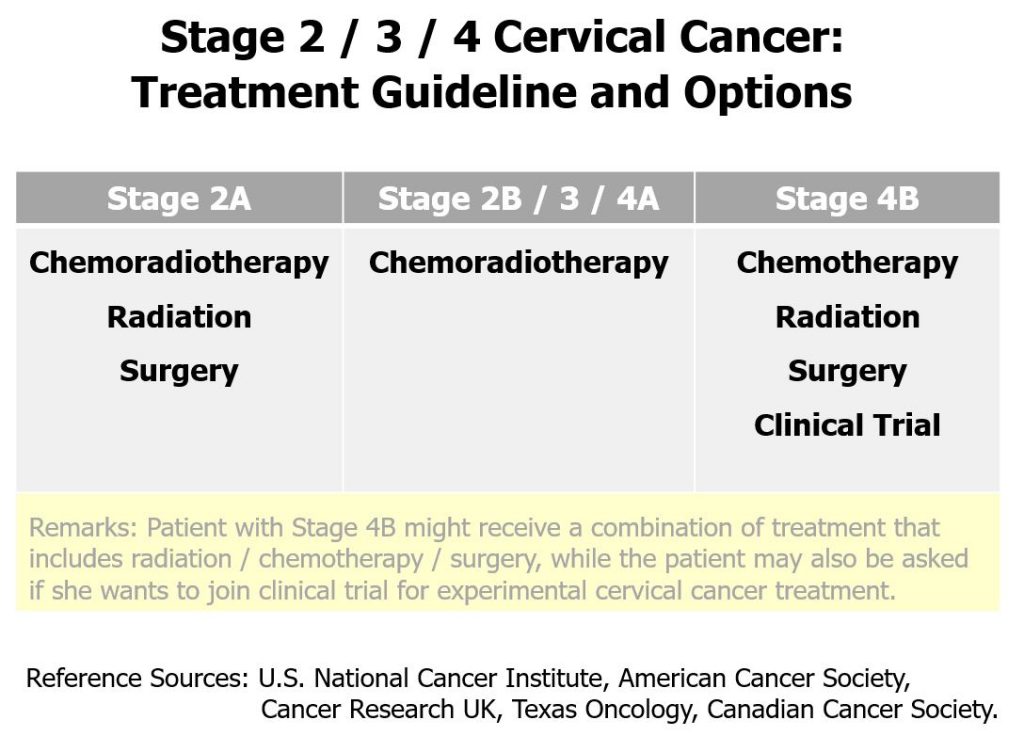 Recommended Read: 93 Tips and Remedies for Chemotherapy & Radiotherapy Side Effects

Watch the video below to learn more about the different cervical cancer treatment procedures and options by stage.

5-year survival rate is commonly cited in cancer statistics that estimate the prognosis of a disease, means percentage of people who live at least 5 years after being diagnosed with cancer.

As shown below, the cancer survival rates and life expectancy depend on a variety of factors, with the key is the cervical cancer stage of the patient when the disease is diagnosed. 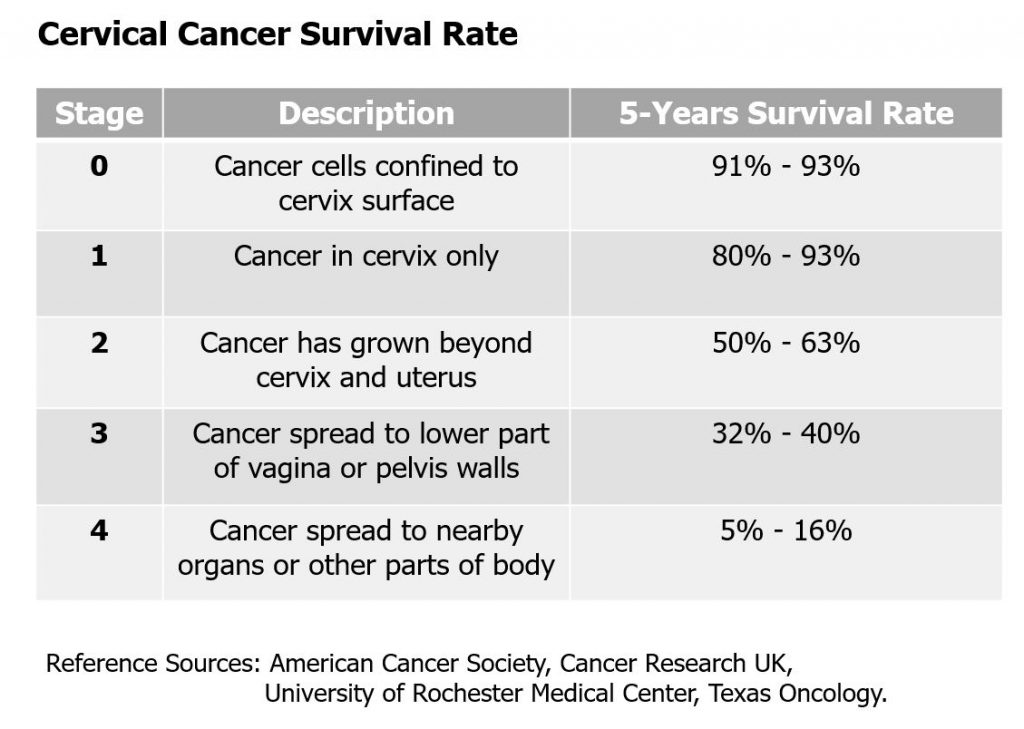 The Signs and Symptoms of Cervical Cancer

As such, it is very important to attend cervical screening appointments with your doctor.

Be the first to comment on "Stage 0, 1, 2, 3, 4 Cervical Cancer: Treatment Options, Survival Rate and Life Expectancy."